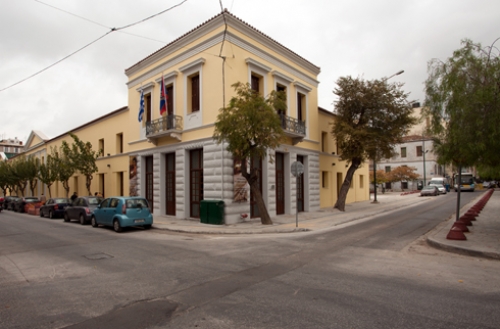 The gallery has been moved in a new location at the area of Metaxourgio. The gallery is housed in an old neo-classical building of the 19th century which was donated to the municipality of Athens and has been thoroughly restored. The visitor can finally enjoy the extended collection of the paintings of famous Greek painters of the 19th and mostly the 20th century in an open well lighted space.

The building has its own historical and artistic value. It was built by the architect Athens Hans Christian Hansen (20 April 1803 – 2 May 1883). He was one of the preferred architects of King Otto and he also built the University of Athens. Initially the building was constructed as a factory of silk (in Greek metaxi) and from it the whole area has taken the name Metaxourgio. At that point it was situated at the edge of Athens but as the city grew the neighborhood has become central. The building has also functioned as a hospital and a garrison station and then it was abandoned for several years. Today it has been transformed into the Public Gallery of Athens and it will hopefully be the first step in the upgrading of this whole area of Athens.

The collection of the Public Gallery of Athens is divided in two buildings which are situated the one right next to the other on a newly built square. The first building contains paintings from the second half of the 19th century and the beginnings of the 20th. In the first room one can admire the portraits of the high society of the Old Athens made by renowned painters such as Vikatos and Typaldos. In this room there are also some sculptural busts made by Apartis and Lameras. In the second room among other things the visitor can admire some of the works of the unique expressionistic Greek painter Bouzianis. In the third room the paintings are more modern. Here  works of Greek painters, that were influenced by the European art movements, are displayed. One can discover cubism in the works of Giga, surrealism in the paintings of Eggonopoulos and primitivism in the art of Gaitis and Astriades. However, these painters do not simply imitate the work of the foreigner artists that were the  leading men of  these artistic movements. They create original works of art by integrating the new elements to their own culture and to their own personal style. In the same room one can witness the influence of Byzantine art in the Modern Greek art and more specifically in the paintings of Kontoglou and Moralis.

The second building holds the most recent and contemporary pieces of the public collection. Elements of an optic art can be discovered in the paintings of Zouni. Abstraction is represented by Spyropoulos. Here there are also constructions and small installations of the contemporary Greek artists.

Even though the Public Gallery has not the wealth of the National Gallery, the visitor here has the opportunity to see some of the most important Greek artists. The progression from a more academic kind of art to modern movements and then to contemporary aesthetics is clearly visible.

Tips:
1. The neighborhood in which the new Public Gallery of Athens is situated is not one of the most reputable of Athens. In case you are not very sure of your step in Athens I would advice to avoid visiting the Gallery after dark.
2. The guards are very children friendly providing toys and music for their young visitors.

We have 33 guests and no members online