Artifacts of the period of the 7th -12th floor are displayed on the first floor. Jewelry, wooden carved furniture and panels, textiles and bronze utensils are decorated with the characteristic Arabic abstract and perpetual designs. It is interesting that even if the Arabic law forbids witting the name of the dead on the gravestone, the tombstones that are on display here have the names inscribed. It seems that even at the start, on the 9th century, this law was not obeyed.

The second floor is dedicated to the period of the 12th to 16th century. Here, the visitor can admire architectural marble decorations, carved wooden plaques, vases from Iran, bronze engraved vases and jewelry. An astrolabes made by the Arabs astronomers of the time will definitely capture the interest of the visitor. Another interesting exhibit on this floor is the chess board and pawns.

The third floor contains objects of the 16th and 17th century. During these centuries science was developed significantly in the Arabic Empire. As a result in this floor the visitor will find manuscripts, pen cases and surgical instruments. It is quite interesting that even objects completely utilitarian such as the medical equipment are also heavily decorated. On this floor there is a separate space which has been formed as representation of a reception room from a mansion of Cairo of the 17th century. Luxury and wealth are evident in the inlaid marble decoration of the floor.

On the fourth floor the collection of the 17th to 19th century is displayed. Here, military parade and battle equipment of this era dominate the space. There are chain mail shirts, firearms, swords and daggers. Jewelry, carpets, manuscripts and precious objects of the 18th and 19th century are also on display.

The Modern Greek culture was greatly influenced by Islam even if Greeks tend emphasize their ties to Western Europe and gloss over their Eastern heritage. The Islamic Museum offers an insight to the Arabic culture and civilization, but it fails to make the connections between Greek Byzantine or Modern Art and Islamic art. Most artifacts, which are exhibited in the museum, come from Egypt, Persia and Iran. It is surprising and maybe a little disappointing that nothing comes from the period of the Turkish dominion of Greece. It seems that this-much hated-past has been thoroughly cleaned away.

Tip: If you want to visit the basement ask the guard at the entrance to give you specific directions. While the stuff of the museum is very polite it tends to forget the basement. 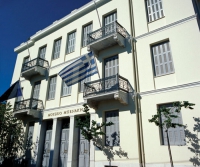 We have 226 guests and no members online