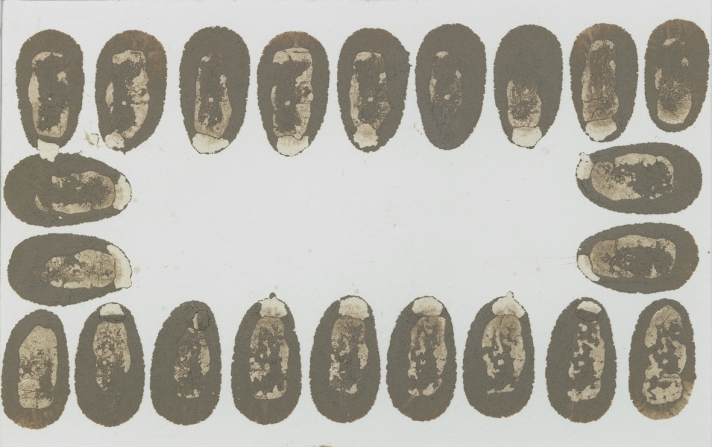 Giovanni Anselmo (g.1934, Italy), is one of the main representatives of Arte Povera. His sculptures reflect the order of things, the cycle of nature and gravity. Anselmo works mainly on granite, a material which, according to him, symbolizes the idea of weight and fossilization. His works defy  physical laws, while always maintaining a balance through the use of fragile and perishable materials.

Pier Paolo Calzolari (g.1943, Italy) is again one of the most important protagonists of the Arte Povera. His practice includes painting, sculpture, architecture, texts, videos, performances, using materials such as fire, ice, iron, salt, mold, smoke etc.. His works raise the ritual of everyday life at the level of aesthetic experience and focus on sensitivity and the brittleness of the objects and materials.

Wim Delvoye’s (g.1967, France) works explore  history of art, Gothic cathedrals and sculptures of the 19th century, from Bosch and Brueghel until Warhol, while revealing the beauty of everyday objects.

Jannis Kounellis (c. 1936, Greece) is recognized worldwide as a leading figure of the Arte Povera movement and a seminal artist whose practice spans painting, collage, sculpture, performance and set design for the theatre and opera. Kounellis is widely acknowledged as a visual philosopher building up a new vocabulary of diverse materials to compose a poetic history of meaning.

Richard Long (g.1945, England), belongs to the pioneers of Conceptual art. Since 1967, Long is  transforming his walks into works of art, sculptures, photographs and texts. His work is both modern and "primitive" conceptual and physical, focusing on the concern for both the finished work of art and the process of its completion.

Mario Merz (g.1925-2009, Italy), an important member of the Arte Povera, creates forms to fill spaces - worlds of his own invention. Igloo, fagots, tables, cones and coils, numerical sequences and neon tubes, are recurring motifs in these utopian worlds. His works juxtapose simple materials that bring to mind the nature and more technological objects.

Marisa Merz (g.1925, Italy) is one of the central figures and the only woman associated with the Arte Povera movement of the late 60s and 70s. Known for her unusual use of materials such as copper, wire, clay and wax, her  sculptures and drawings reflect the poetic sensibility and vision for art and life.

Franz West (c. 1947-2012, Austria) began as a self-taught artist in the early 70s, and created small works on paper. Since then, his practice included abstract sculptures, furniture, collage and installations.

Gilberto Zorio (c., 1944, Italy), is also a representative of Arte Povera, using different materials such as metal, light and laser. His aim is to create phenomena associated with the energy produced by the combination of certain materials.

Last modified onWednesday, 19 November 2014 15:19
More in this category: Returned to Ithaca, Photography exhibition at Blender Gallery The Depiction of Death in the Work of El Greco

We have 322 guests and no members online