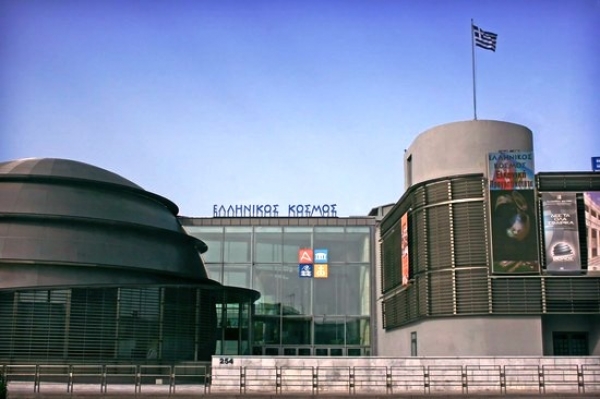 Hellenic Cosmos, FHW's Cultural Centre, was inaugurated in 1998, originally occupying a site of 16,000m2. It was housed in a former industrial building, which albeit maintaining important elements of its original use, it was transformed into an ultra-modern, living museum that aims to be a source of learning and satisfy the needs of the contemporary "society of knowledge".

It is located at 254 Pireos Street, on the former industrial axis joining Athens and Piraeus, where memory meets the city's modern identity. Today Hellenic Cosmos occupies an area of 65,000m2. The area is being continuously reshaped in order to cover the increasing needs of the Cultural Centre. Therefore, Building 7, which was inaugurated in 2004 and is a multifunctional cultural area that has hosted various events, from exhibitions and educational programmes to conferences and seminars, will be replaced by a new building improved both aesthetically and functionally.

In March 2006 the construction of the “Tholos” was completed, a building that houses the most perfect, presently, Virtual Reality system of Hellenic Cosmos with a capacity of 130 people. It is a building of exceptional aesthetic value with unique technological infrastructure, which hosts the Foundation’s digital collections. The “Tholos” resembles a planetarium regarding its natural and morphological characteristics. But essentially their only common element is the semi-spherical shape of the projection surface. The external spherical shape corresponds to a swirling celestial body.

This sensation is created by successive rings that surround its external shell and by the special lighting during the night. The shows are interactive and not static, creating a unique experience of immersion into the virtual world that is characterised by immediate response, originality, flexibility and liveliness.

We have 77 guests and no members online