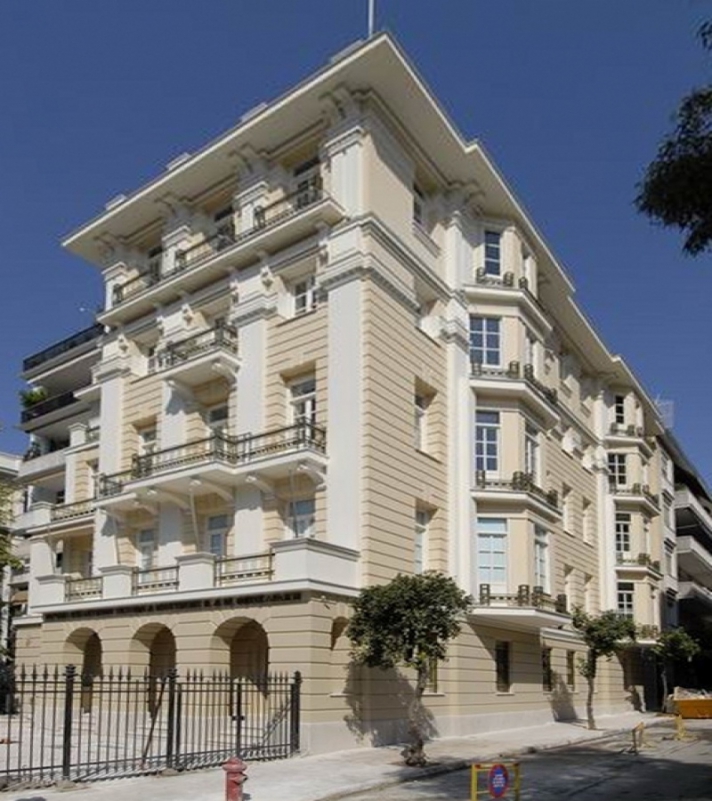 In 2005 the Theocharakis Foundation bought and restored one of the last standing old buildings of the centre of Athens. The building was renovated and its interior was reformed so that it could function as an exhibition area and as a concert hall. The building has 6 floors. On the lower ground level there is an Auditorium with the capacity of 175 seats. On the ground floor there is the reception area and an art shop. A café can be found on the first floor while the second third and fourth floor function as exhibition areas. On the fifth floor the permanent collection of the Modern Greek painter Spyros Papaloukas is housed.

The building was originally the house of K. Renti. It was designed and built by the Greek architect Vassilis Tsagris in the years 1928-1930. Tsagris had also worked in Vienna. He had his own style and he has influenced many other Greek architects. The style of the building is eclectic combining various elements of the neoclassic style (which in these years has begun to fade away) and the elements of French architecture. The ground floor and the entrance bare have a simple grand volume hat functions as a pedestal for the rest more decorated building. Columns with capitals emphasize the vertical axon elongating the building. The strong cornice of the top of the building captures the spectator’s gaze creating dramatic shadows. Details such as the metallic rail of the balconies are the stylistic signature of Tsagris. After years of various uses this historic building is now a house of arts.

The permanent collection of Spyros Papaloukas

On the fifth floor there is a permanent collection of the Greek Painter Spyros Papaloukas (1892–1957). The painter studied art in the school of Arts of Athens and then in Paris. His style combines influences of post- impressionism artists such as Van Gogh, Matisse and Cezanne with the Byzantine Art. The abstraction, the intense brush strokes and the lively colors of his works make him a truly modern painter.

B&M Theocharakis Foundation for the Fine Arts and Music

We have 106 guests and no members online