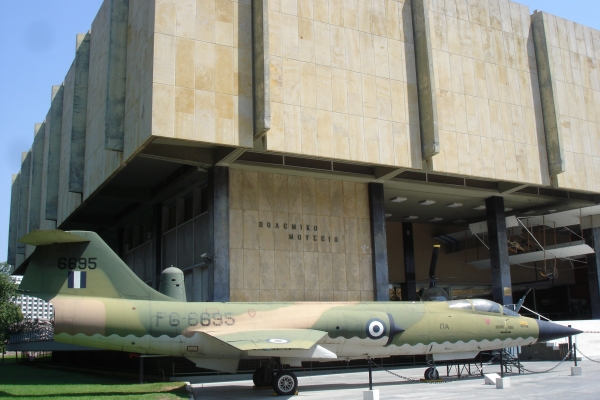 The war museum contains an extended range of war machinery and weapons that were invented and used by men from the prehistoric times until the 20th century. It also includes some pieces of art that represent historical battles, photographical archive, film documentaries and historical maps.

The exhibition starts on the second floor on the left hand side with rock tools from the Neolithic times (circa 7.000 B.C.) that were probably used as everyday tools but also for hunting and fighting. In the same room one can also see the Cycladic rock tools and eventually the bronze weapons of Mycenae. Further along there are replicas of the weapons that were used both by the Persians and the Greeks during the 5th century B.C.. Bronze has been replaced by iron. Here there also copies of the metopes of Parthenon and the frieze of the temple of Apollo at Basae. Both pieces of art represent the mythical battles between the Lapiths and the centaurs and the Greeks and the Amazons. From these representations the visitor can deduce how a battle in that time would be.
Further along there is information on expedition if Alexander the Great. Replicas of the weapons of this period are displayed. The visitor can also watch a documentary on this subject. The next room has the arms and the war machinery of the Byzantine period and the medieval times.

The room dedicated to the struggle of liberation of 1821 has plenty exhibits. Arms from several different areas of Greece are presented here. Ornate swords, powder holders, safe keepings are displayed. A small canon can also be admired. Several paintings (most of the copies and not the originals) of Greek painters of the 19th century that painted the important battles of this war can be seen here. The arms, the ships and the metals of the New Greek State are presented in the next room. When the visitor reaches the room dedicated to the period of 1912-1918 he will be able to admire small replicas of the first airplanes. Here the original work of the Greek painter Flora-Karavia are displayed; sketches and portraits of simple soldiers and officers of the Balkan wars. The First World War and the Minor Asia expedition are also represented through photos paintings and arms. A documentary on the Minor Asia war can be watched. The Second World War also has many exhibits. Beside the weapons and the photos, bombs parts of submarine and a whole motorcycle of the time is on display here. Moreover the original paintings of the Greek painter Ubertos Argyros can be found here. The battle on the Albanian frontier is presented extensively in his painting. Interesting are also the improvised guns made by the Greek Resistance during the German occupation.

The exhibition continues of the first floor with bombs and weapons still of the era. Here a room is dedicated to Cyprus containing a synopsis of its history. The Cyprian collection starts with the prehistoric arms of this particular area and ends up at the Turkish invasion. Photographs or the recent history are presented.

On the ground floor one van see the military uniforms of various periods. The balconies and the garden of the museum are covered with artillery of different period weapons used by the Greek Navy and aircrafts used by the Hellenic Air Force.

We have 200 guests and no members online