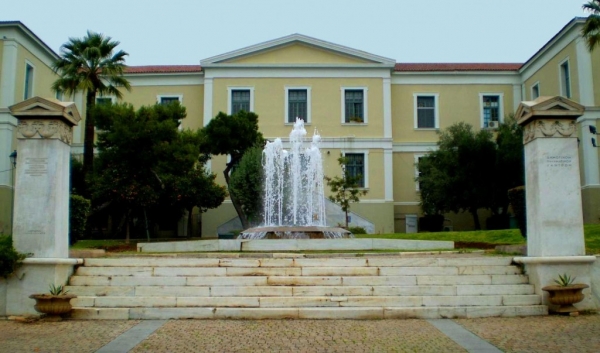 The collection of the museum of Greek theatre includes posters, programs, photographs, costumes and personal items of historic plays and performances and famous actors and actresses of the Greek theatre.

The museum is housed temporarily in the basement of the Cultural Center of the Municipality of Athens. The building is one of the oldest of Athens. It was built by the famous Danish architect Ch. Hansen in 1842 in neoclassical style. Initially it was used as a Community Hospital. In 1971 it was decided that the building should be restores in its initial state and should be preserved as one of the historic buildings of Athens. Therefore, several buildings that had been added to the initial architectural plan were demolished and the garden was reformed in order to house the Cultural Center.

The History of the Museum

The museum was founded in 1938 by the “Greek Play writers’ Society”. Yannis Sideris, a historian of Greek theatre, mamaged to collect and organize photographs, archives and various mementos of the history of Greek Theatre. Beside the museum, a library that contains an extensive archive with negatives, photographs and audiovisual material was created and now is open to students and researchers of the field.

Walking Through the Museum

When the visitor enters the museum, he finds himself in a long corridor. The walls of the corridor are decorated with posters, tickets and theatrical programs of various plays. One can find here programs that were made for plays of the 1900. Starting from the left hand side and reaching the end of the corridor one will be able to admire sculptural busts of famous Greek play writers. The first room contains photographs form important plays from the period of 1919-1972. Here, there are also exhibited costumes from plays of the period 1960-1990. The second room is devoted to the famous theater director Karol Koun. One can find several photographs, books and other personal items of Koun. In the third room props and costumes of various plays are on display. A separate section of the room is devoted on Sophia Vempo a famous Greek actress and singer of the ‘50s. There also some models of the stage scenery of old shows.

If the visitor returns to the corridor and moves to the right will see that the right end of the corridor dolls from the Greek old doll theatre and the figures of the traditional Shadow Theatre of Greece. The corridor leads to a big room that is divided to smaller spaces that represent the dressing rooms of the most important actors and actresses of all the Greek theatrical History. Each dressing room contains costumes, photographs, props and personal items of the actor and actress. There are 12 of those for Aliki Vougiouklaki, Tzeni Karezi, Kyveli, Demetres Mirat, Katerina Andeadi, Demetres Horn, Eleni Papadaki, Katina Paxinou with Alexis Minotis, Melina Merkouri, Eli Lampeti, Marina Kotopouli and Maria Kalas. The rest of the room contains mostly photographical portraits of other famous actors and actresses.The relocation of Museum and Study Centre of the Greek Theatre to new address is imminent.

Tips
The relocation of Museum and Study Centre of the Greek Theatre to new address is imminent.

Last modified onMonday, 10 March 2014 22:44
Tagged under
More in this category: Museum of Greek Children’s Art Museum of the city of Athens Vouros-Eutaxias

Museum and Study Centre of the Greek Theatre

We have 116 guests and no members online