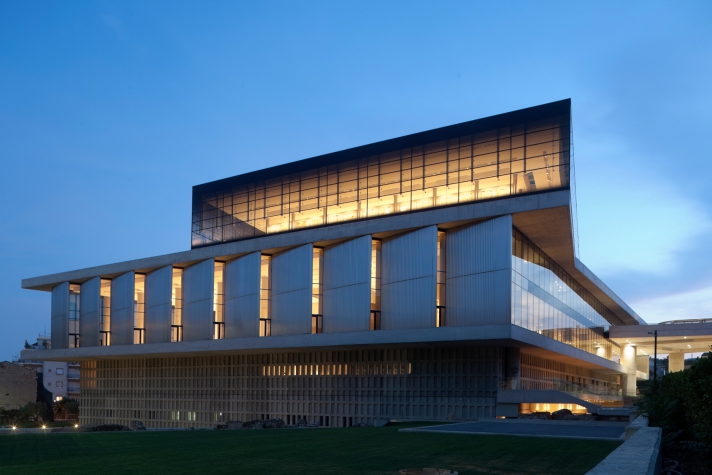 The Museum of Acropolis is the newest architectural jewel of the city of Athens. Its building is a modern one covered mostly with glass that allows the natural sunlight to lighten the statues and relieves of Acropolis and a constant view to the actual sit of the Acropolis.

As the visitor approaches the building, he can see through the glass floor the ongoing excavation of houses and public buildings form the 5th B.C. to the7th A.D that stood at the feet of Acropolis. The exhibition starts at the ground floor. On both right and left side of the ramp are displayed artifacts that were discovered at the slopes of Acropolis. The show cases hold vases of various types that date form 3000 BC to 1st century BC. The decoration of the vases varies. In some cases it is geometrical (7th -9th century B.C.), in others black figured (7th-5th century B.C.) and eventually red-figured (5th -1st century B.C.). There also some small statues and relieves that are votives to the small temples and sanctuaries that also used to be on the slopes of the Sacred Rock of Acropolis.

On the first floor right in front of the stairs and slightly to the right the exhibition holds fragments of the pediments of the temples that existed on the Acropolis’ rock prior to the Persian invasion. On the right side of this floor the archaic statues that stood as votives outside and inside of the temples are displayed. Kouroi and Korae, the distinct types of male and female statues of the era can been admired here. The visitor has the opportunity to witness the stylistic development in Sculpture of this period. Further down the exhibition, there are few samples of the Severe Style (490-450 BC) in Sculpture and the famous relief of the Mourning Athena. If the visitor wants to follow a chorological path through the museum, he should move to the second floor and not visit the left side of the floor at this point.

On the second floor there is a café-restaurant, a shop, a multimedia center and a terrace.

The exhibition continues on the third floor, where is the Parthenon Gallery. Here, the visitor can admire the sculptures of the pediment and the relieves of the metopes and frieze of the Parthenon. They are placed in a manner that simulates their original position. Moreover through the surrounding windows the visitor can see the actual building of the Parthenon where the sculptures initially stood. Copies of the original statues that are today at the British museum are supplied in order the visitor to be able to understand better the whole synthesis of the sculptural decoration of the temple. On the east side stand the fractures of the east pediment. Behind those, the east metopes and the east part of the frieze is displayed. In the same way on the west side of the floor the west side of the decoration of the Parthenon is shown and the same arrangement is carried on the north and south part of the floor. The third floor also has a small room where a film about the history of the building of the Parthenon is presented. The films shows the gradual destruction of the temple through the ages and wars, its transformation to Church and then to mosque and eventually the subtraction of the Parthenon sculptures by Lord Elgin.

Following the chronological order the visitor should return to the first floor in order to admire the sculptural decoration and the famous Caryatides of the Erectheion, the temple which was built about the same time as the Parthenon. The temple of the Athena- Nike is the newest temple of that era. The frieze of the parapet of the Athena –Nike is famous for the beautiful Nike that laces her sandals and can be admired here. The left side of the first floor contains statues from the 5th century BC. to the 5th century A.D. As Athens decline begins (due to the Peloponnesian war) less and less works of art are created for the Sacred Rock of Acropolis. 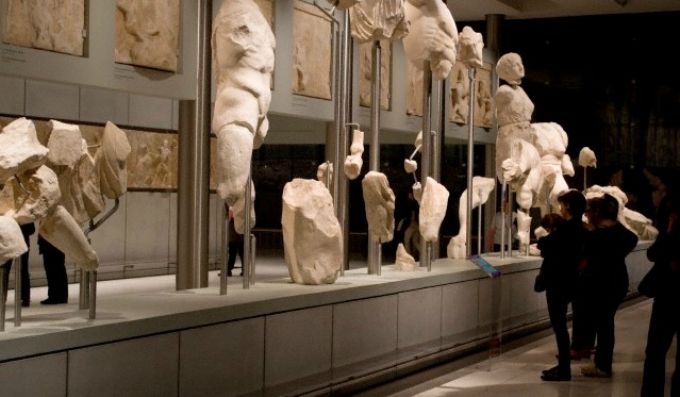 Overall the Museum of Acropolis is a modern museum which combines a strategic architectural design, beautiful and important artifacts and modern technology. It is planned in a way that helps the visitor understand better the art and culture of the classical Athens. Moreover it is a museum with an obvious political message. As copies of the missing sculpture emphasize the lack of the originals subtracting something crucial form the experience the visitor is almost forced to wish to return of the marbles of Parthenon to Athens.

Tip:  Famous for its cuisine and its low prices has become the restaurant of the Acropolis museum. In order, though, to try it one has to pay the entrance fee of the museum.

Every Friday the museum is open untill 10 o'clock at night and its' famous restaurant is on untill 12 o' clock at night. Enjoy a perfect evening!

Last modified onMonday, 08 May 2017 17:15
Tagged under
More in this category: Numismatic Museum

We have 210 guests and no members online