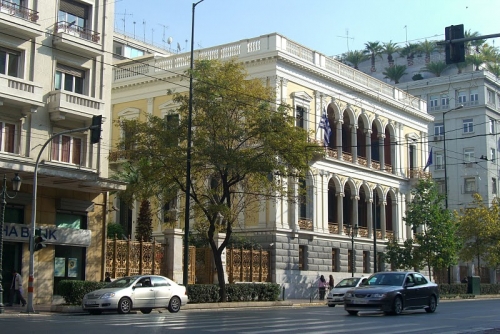 The first room of the museum on the right side contains information about the building itself and the private coin collection of Schliemann. The second room exhibits the objects (pieces of metal) that were used as the first currency of the human history and then some of the oldest coins. The same room also contains several “thesaurus” of various areas and times that were found in excavations. In general, the first floor is dedicated to the coins of Ancient Greece until the Hellenistic period. Some rooms accentuate the history of the coins while others (4 and 5) the representations that were on these coins and their artistic value.

On the second floor the history of coins continues. In the first room there are the roman coins and in the second room the Byzantine ones. The room contains the medieval coins both of the Western Europe and the countries of the east. A small sample of modern foreign coins is displayed in the room number 4. The sixth room contains coins and medals of the new Greek State (after 1821). In the last room of this floor one can see the Greek coins pounds of the period of the inflation during the Second World War.

Tip:  In front of the museum there is a small secluded garden decorated with a statue offering a green refuge right in the centre of Athens. At the back of the garden the café of the museum is situated, which is accessible even if one doesn’t want to visit the museum and pay the fee of entrance.

We have 59 guests and no members online