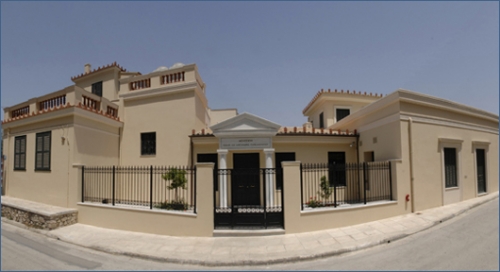 The building of the Canellopoulos Museum was initially the home of an old Athenian family called Michaleas. The house, which is situated right on the slope of the Acropolis rock, was built in 1894 in the neoclassical style. It was purchased and renovated by the Greek State in 1960. The museum opened in 1976. In 1995 the museum was forced to close temporarily due to extended damage to the foundation of the building that was caused by underground running water. Moreover the plot next to the museum was purchased and a new wing was added. In this way the display areas were extended and for the first time all the collection of Canellopoulos could be presented to the public. Today the building is freshly renovated and its exhibition areas are up to the standards of the contemporary museums.

If you have chosen the chronological route, when you enter into the room start from your right hand side. The first display case holds the oldest objects of the collection. Here the visitor can see stone axes and vases that belong to the Neolithic period and the Early Bronze (circa: 2.800 B.C.). Marble vases and some of the famous Cycladic figurines stand next to the first case. Moving on there are clay figurines of the Minoan civilization representing bulls the sacred animal of the Minoan religion. The Mycenaean clay figurines and bronze weapons are next to those. From there and on the visitor can admire mostly clay vases and figurines decorated in various techniques according to the period they were made. There are the Geometric vases of the 9th to the 7th century B.C., archaic vases of the 7th century B.C., Corinthian ones with the characteristic yellow clay of the 7th-5th century B.C., Attic black figure vases of the 5th century B.C., red figure vases form the turn of the 5th century until the 4th century B.C. , the white lekythoi that were used for the funerary ceremonies and used to carry aromatic oils and the oil lamps of the 1st century B.C.. In this floor among the ceramic art the visitor can also admire bronze vases of the 5th -1st century B.C. , a Bronze ram form a ship of the 3rd or 2nd century BC, an oversized marble woman’s head and other interesting artifacts.

The First Underground floor is more or less devoted to the art of metallurgy. Here, the visitor can see bronze helmets and daggers, bronze figurines and strigiles. One cannot miss the intricate golden jewelry mostly of the 3rd century B.C. In this section the visitor can admire seal stones made of semiprecious stones and golden impressed bands that were sawn on the funerary clothes of the dead will definitely catch the visitor’s eyes. There also bronze mirrors and multicolored perfume bottles made of glass paste. Moreover, a central case presents coins of different city-states of the Ancient Greece.

Next to the entrance

Taking the stairs up again and before leaving the museum the visitor discovers two more display-cases. The first one contains examples of the art of ancient Cyprus. There are vases with geometric design of the 7th century B.C. The next case holds bronze figurines from Egypt and daggers and axes that probably belong to the Phoenician civilization. To the opposite site there are some marble funerary lekythoi that were posted on the graves instead of tomb stones.
Even if The Paul and Alexandra Canellopoulos Museum is not one of the biggest or more known museums of Athens, it still has a lot to offer to the visitor. In this museum the visitor can get a small but a significant insight into the Greek art and culture.

The museum has many other collections. However at the time of my visit the rest of the exhibition was closed to the visitors. The collections of the museum are the following: 1)Funerary masks from Fayum (2nd-4th century A.D.) and Coptic fabrics (6th-12th centuries A.D.) 2) Gold jewelry, bronze crosses, vases and lamps of the Byzantine period (6th-12th centurie A.D.) 3)-Byzantine coins and lead seals 4) Hieratical vessels and wood carvings of the Byzantine and post-Byzantine period (9th-10th centuries)  5) Icons of the 14th-19th centuries, many of which bear the subscriptions of their painters, mostly famous artists of the Cretan School, the School of Constantinople, and from Macedonia. 6)Folk art jewelry, fabrics and elements of the popular garments and weapons, dated to the 18th and 19th centuries.More information on these collections soon, after my next visit to the museum.

The Paul and Alexandra Canellopoulos Museum

We have 195 guests and no members online