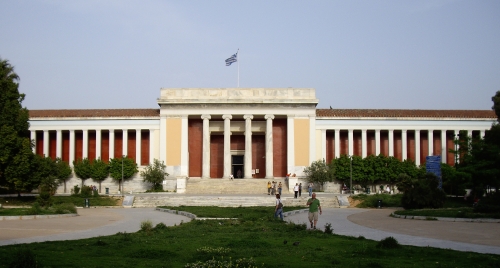 The National Archaeological Museum is the biggest museum of Athens and one of the most important in the world. It is situated in a majestic neoclassical building created by L. Lange and Ziller in the 19th century. The exhibits cover a large chronological and geographical span offering sample from many different periods and places of Greece.

When the visitor enters the museum he is faced with three different doors. Straight in front of him is the room with the Prehistoric Collection.
The Prehistoric Collection is divided into three rooms. On the right, the room is dedicated to the Cycladic Civilization (circa 2.800 B.C). Vases and everyday objects that were discovered mostly in cemeteries of various Cycladic islands are displayed here. The Cycladic figurines can also be seen in this room. There are some of the oldest ones, which are more abstract, and the famous harp player and flute player. The left room is devoted to the findings of the Neolithic settlements (circa 5.300 B.C.), presenting vases and everyday objects and some very early and abstract figurines. The room in the center contains objects form the Minoan and Mycenaean civilization. The visitor has the opportunity to admire that golden jewelry, the ornate swords and the golden funerary masks.

Going back to the entrance of the museum the visitor should go to the left door. Here stats the Sculptural Collection which follows a circular route and presents the development of sculpture in ancient Greece. The Sculptural Collection ends at the right side of the entrance bringing the visitor back to where he started. In the first room on the right the beginning of monumental sculpture in Greece in demonstrated. Daedalic sculptures heavily influenced by the sculptures of Ancient Egypt are shown here. The next rooms display Kouroi and Korae the male and female type of the Archaic Sculpture. The development is obvious through a variety of sculptures. Severe Style (490-450 B.C.) is also represented. The famous bronze statue of Poseidon/ Zeus of this period can be seen here. Many rooms contain relieves from the tombstones of the Athens’ ancient graveyard, demonstrating the development in the technique of the relief. Further along the visitor will find a copy of Pheidias Athena, and statues of the other famous classical sculptor Polykleitos. The Hellenistic Sculpture is also presented. The assemblage of Aphrodite and Satyr and the statue Hermaphrodite are characteristic examples of the Hellenistic period. The last rooms of this tour contains sculptures of the Roman period. The visitor can admire some very realistic portraits of the Roman Emperors.

On the back side of the museum, which can be reached by the circular route that was described above, there are the rooms where the temporary exhibitions are held and the private collections are kept. The right side is where the visitor can see the current exhibition of the museum. On the other side some private collections that were donated to the museum are presented. They contain mostly small but valuable objects (jewelry, small figurines) that might belong to prehistoric times or even to the Byzantine period. Moreover, several rooms display artifacts made out of metal. Metallic vases with elaborate decoration can be seen here. The armor of the era is part of this exhibition. Also the famous and mysterious mechanism of Antikythera is on display. At the end of this series of rooms a chariot with all its metallic parts is represented. On this side of the museum, there is also a small collection of Egyptian artifacts containing sarcophagus, figurines, funerary objects and roman fayum.
On the second floor of the museum the central room displays vases murals and even furniture that was discovered in Thera and are dated to circa 1600 B.C.. On the right side begins a circular route which is dedicated to development of the decoration and the technique of construction of vases. Numerous examples of prehistoric, geometrical, eastern, black figured and eventually red figured vases can be found in these rooms. There are also rooms that display metal or even glass vases. On the same floor there are rooms that are displaying the development of clay figurines. One can also see the art of the ancient Cyprus, where vases, jewels and figurines of that area are also presented.

Tip: The visitor can hardly see and appreciate the wealth of the National Archaeological museum in few hours. Its extent and variety of exhibits demands a second visit. My advice is to see the two floors in two different days. On the other hand if someone wishes to browse quickly through it, it would be better to enjoy the Mycenaean art and the rooms with the more famous sculptures and then go directly to the room devoted to Thera. A quick walk on the second floor to witness the development in the manufacture of vases should be adequate.

Last modified onMonday, 08 May 2017 17:25
Tagged under
More in this category: Museum of Keramikos The Paul and Alexandra Canellopoulos Museum