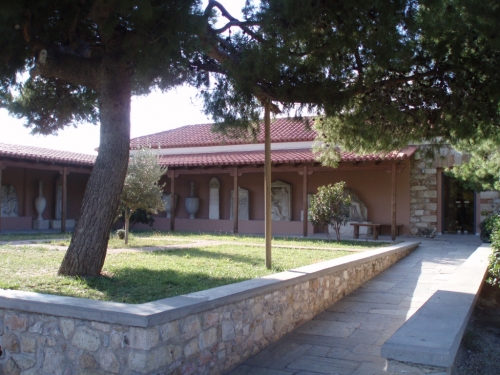 The museum of Keramikos is situated in the archaeological site of Keramikos. The entrance fee is both for the museum and the site.
At the site of Keramikos the visitor can see the walls of the ancient city of Athens and the main monumental gate to the town. The entrance to the city had at both sides two big towers that were used for protection against hostile armies. A small part of the Sacred road leading from the suburbs to the Sacred Rock of Acropolis can also be seen here. Next to the road there is the canal where the ancient river Iridanos flowed. Outside the city walls, on the site of Keramikos was the city's cemetery. The ancient Athenians had built a square at the edge of the cemetery. There, rituals and sport events were organized in honor of the dead.

The museum of Keramicos is a small place that holds the findings of the archaeological site. In the first room the visitor will see the tombstones that adorned the cemetery. The older ones belong to the Archaic period (9th -7th century B.C.) and the newest ones to the Roman period. In these grave stones the development of the sculptural style and the technique of the relief are obvious. The interior yard also contains sculptures and scriptures on stone from the cemetery.
The following rooms have vases, jewelry and other objects that were offered as kterismata (objects that supposedly accompanied the dead to his afterlife). The last room has artifacts that were discovered in a group tomb of men, women and children. It seems that in the 429-426 a malady infested Athens killing a substantial number of the population. The authorities gathered the bodies of the dead and buried them hastily in a group tomb so that the living would not be contaminated.

We have 115 guests and no members online