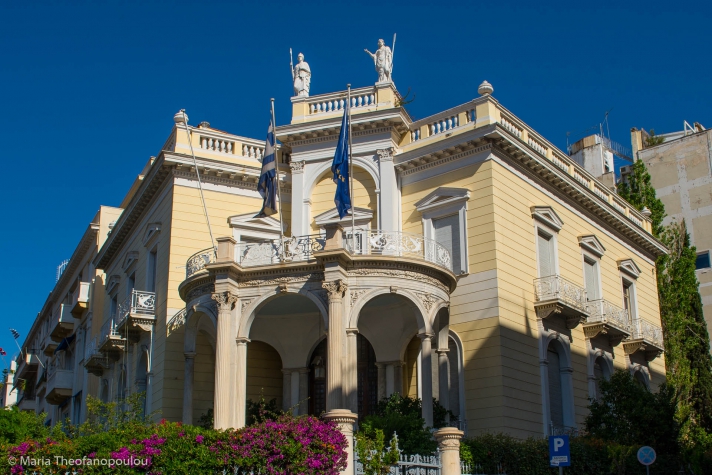 The Cycladic Art Museum is located in two different buildings, next to each other which are connected by a glass-roofed corridor. The main building built in 1985 by the architect Ioannis Vikelas houses the permanent collections of the museum. The Stathatos Mansion, a neoclassical building created by the architect Ziller in 1895, is the newest addition of the museum and usually houses temporary exhibitions. Even if the museum has taken its name from its prominent Cycladic collection, the visitor will be pleasantly surprised by its other collections and mostly by the very well presented information on various artistic techniques and everyday life and customs of the Ancient Greeks.

The first floor of the museum has the Cycladic collection. The Cycladic civilization developed mostly in the Cycladic islands between 3200-2100 B.C.. During this period was the first time that metal (bronze) was used for making tools. The collection contains artifacts of three different periods of the Cycladic Civilization. The visitor will be able to see the tools, the vases made by both clay and stone and most importantly the figurines of these periods. The marble more or less abstract Cycladic figurines have become famous since they have inspired many modern artists (for example Picasso). The collection has some of the early and late examples of the figurines which are really schematic and abstract. The more figurative ones belong to middle period, the time of the peak of the civilization. One figurine that will definitely capture the attention of the visitor is the one that is sited and raises its cup to make a toast. Also the large scale figurines are really impressive.

The second floor houses a collection by the title “Ancient Greek Art, which covers the Middle and Late Bronze Age (2000 - 1650/1650 - 1100 BC), Dark Ages” – Geometric period (1100 - 700 BC), Archaic period (700 - 480 BC), Classical period (480 - 323 BC), Hellenistic period (323 - 31 BC), Roman period (31 BC – AD 395). Vases, tools, fragments of sculpture, golden jewelry, vases made of glass and bronze helmets represent these periods. At the end of the room there are some tables accompanied by pictures, graphics and video that explain how all these things were manufactured. The visitor has the opportunity to understand the technique of pottery, goldsmith art, wind-blown glass and metallurgy.

The third floor has a collection of Cyprian Art that covers a period from Prehistoric times to Roman Empire. The collection has samples of vases, coins, glass utensils, jewelry. All of these artifacts are very similar to the Greek ones of the same period indicating that the same more or less culture was developed both in Greece and Cyprus.

The fourth floor is dedicated to everyday life of the ancient Greeks. Here, the exhibits are connected to photos, diagrams and videos that explain their use to the visitor. There are several show cases that are dedicated on different events that would constitute the life of a common man of those times. Moreover on the back side of the room videos on the same subjects are projected. The visitor has a unique chance to see the rituals represented by actors. Every video is combined with the ancient text and pictures of sculpture and vase decoration that has provided the archaeologists with the necessary information.

The visitor can watch: 1. the ancient religion, its’ gods, heroes and its’ ceremonies 2. The wedding ritual, the adornment of the bride and her unveiling by the groom 3. The preparation of the soldier for the battle and the ritual of leaving his home, his wife and child. 4. The way the agora and the voting system functioned 5. The symposium, the entertainment. 6. The athletes’ preparation and their award. 7. The ritual of giving name to new born child. 8. The women's occupation: raising the children and waving. 8. Children going to school.

In a different section the habits and the rituals related to death are presented: 1. the mourning and burial of the dead, 2. paying respect to the dead by visiting the grave and making offerings.
The Cycladic Art museum has two great advantages: an impressive collection of art and high informative and educational value. Instead of just presenting the artifacts of the ancient civilization the museum's goal is to offer the visitor information in a fun and in a easy to understand way. Thus the objects, which are being presented, attain new meaning and value for the visitor.

Last modified onMonday, 08 May 2017 17:34
Tagged under
More in this category: Byzantine and Christian Museum Museum of Keramikos

We have 52 guests and no members online