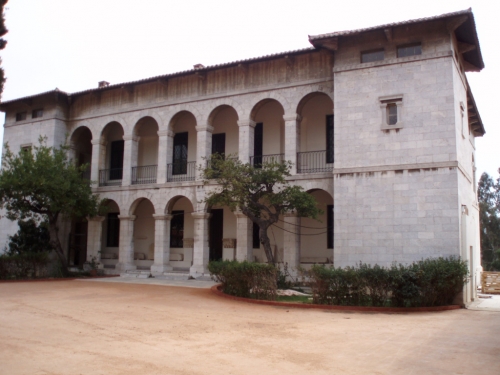 The visitor’s route is definite. There is no way that someone will get confused and not follow the specific circular tour which is organized both thematically and chronologically. The first room holds sculptures of the 3rd century A.D. In this room the visitor can see how the ancient art form and symbols attained new content through the Christian beliefs. Secular objects, jewelry and vases of this period are presented. The next room contains sculptural parts of some of the first Christian sculptures. Initially Sculpture had an important role in the decoration of the temple. Later on churches will be mostly decorated with murals and mosaics. Another room is dedicated to Coptic art. Very interesting is also a double tomb which was discovered in Stamata of Attiki. The two tombs have been transferred to the museum. The visitor can see the Christian symbols that decorated the walls of the tombs and the small vases and others objects that accompanied the dead to the after life.

The next part of the museum is dedicated to the administration of the Byzantine Empire. Here, a large collection of coins is displayed. The older ones belong to reign of Emperor Flavius Arcadius (the first to have inherited the east part of the divided Roman Empire 395 A.D.). The newest belongs to the Palaiologian period (circa 1328 A.D.). Another thematic unity is dedicated to the centuries of crisis (7th-8th century A.D.) of the Byzantine Empire. The constant wars and the economic crisis of the era slow down the development of the Byzantine art. Samples of murals from various temples are displayed here. Further along there are icons which present the influence of the Italians to the Byzantine art as Constantinople is invaded by the Venetian in 1204. A room contain the objects of every day life of this period. The next room is dedicated to the art of the Palaiologian Period.
Even if the Byzantine Empire is seized by the Turks, development of the Byzantine art does not stop here. Crete for example is governed by the Venetians. The museum has a variety of works done by Cretan artist which were influenced by the Venetian art. Another unity is dedicated to the Ionian Island where the Italian influence was also strong. There are also examples of Christian art form areas that were under the Turkish dominion. The last part of the museum displays icons made in the 18th century and the decoration of the churches built by the New Greek State. The new artists abandon the Byzantine tradition for the European artistic style.
The exhibition of the Byzantine and Christian Museum follows the modern ideas of how a museum should be. Instead of creating a display that follows a strict chronological order, it attempts to combine the art with the society, the political and economical situation of each period offering thus a better understanding of the Byzantine Art and History.

We have 21 guests and no members online