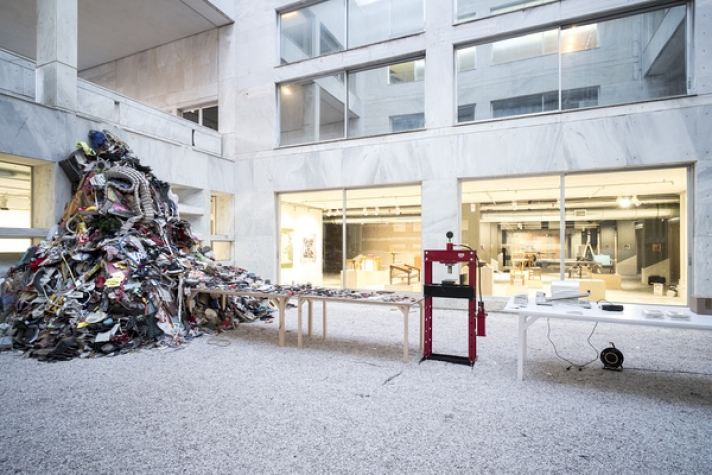 On April 8, documenta 14 opens its exhibition in Athens.

Extending over the city in more than 40 different public institutions, squares, cinemas, university locations, and libraries, over 160 international artists will show works newly conceived for documenta 14.

Interactive map of documenta 14 exhibition: Maps of all venues in Athens can be found here.

On October 6, 2014, a symposium titled "documenta 14, Kassel: Learning from Athens" was held at Kunsthochschule (Academy of Fine Arts) in Kassel, Germany, at the invitation of the academy. Organized by the team of documenta 14, and led by Artistic Director Adam Szymczyk, the symposium presented key members of the next documenta organization, as well as discussed essential ideas and thematic concerns of the exhibition project as a whole, scheduled to take place in 2017.

The city of Kassel has been the host of documenta since its inception in 1955. Likewise, over the past thirteen editions, documenta has served as host to many artists and cultural practitioners from around the globe. But, ultimately, this position of host—with all the privileges involved—appears to be no longer tenable and begs to be questioned, if only temporarily. To this end, Szymczyk introduced documenta 14’s planned twofold structure: In 2017, documenta 14 will establish a second site—Athens—bringing Kassel and the Greek capital onto equal footing as the two locations of the exhibition. Thus documenta’s undisputed position as host will be abandoned for another role, that of guest, in Athens.

Szymczyk noted that the main lines of thinking behind this move are manifold. They have to do with the current social and political situation both in Europe and globally, which motivates artistic action. Further, they indicate the need to embody in documenta 14 the palpable tension between the North and the South as it is reflected, articulated, and interpreted in contemporary cultural production. The challenge involves avoiding the traps of binary logic, while resonating with changing realities. To that end, instead of the singular spectacle, with its clearly designated location and temporal order, typical for great international exhibitions, documenta 14 will comprise two iterations set in dynamic balance in space and time.

The distance between Kassel and Athens will fundamentally alter the visitors’ experience of documenta 14. A feeling of loss and longing brought about by geographic and mental displacement created by two distant iterations of the exhibition might change the visitors’ perception of the show, working against the idea of rootedness and countering the widespread, normative assumption that such an exhibition must sustain the unity of action, place, and time. Challenging this state of things, documenta 14 will attempt to encompass a multitude of voices in, between, and beyond the two cities where it is situated, reaching beyond the European context from the vantage point of the Mediterranean metropolis, where Europe, Africa, the Middle East, and Asia face each other. The diverse and diverging locations and socioeconomic circumstances of Kassel and Athens will come to bear on the very process of creation of the exhibitions, while inspiring and determining its individual works of art. For documenta 14, the participating artists will be invited to think and produce within the dynamic between these two cities.

The working schedule envisages documenta 14 to open in Athens in April 2017; it will then be inaugurated two months later in Kassel, on June 10. This will ensure that there will be a month of overlap, with two parts of the exhibition running in parallel. Moreover, though each iteration of the exhibition will be developed as an autonomous project, they will inform each other’s content while not repeating the form, with several distinctive venues in Athens, as in Kassel. Documenta 14 intends to learn from the city of Athens and its citizens, instead of parachuting a prepackaged event from Kassel into one or several picturesque venues. Rather than being merely a sum of two destinations, documenta 14 will unfold in a three-year-long process of learning and producing knowledge, while also engaging in the process of instituting spaces for public life in both locations. In this process, both cities’ communities will become involved, contributing to the project. Already, over the course of 2013 and 2014, several instructive meetings have taken place in Athens with a number of the city’s cultural producers who represented the diversity and contradictions of the Greek context today, beginning an ongoing discussion of collaboration with certain institutions there. In parallel, similar discussions have been led in Kassel.

Greece in 2014 is not an isolated case; it is emblematic of the fast-changing global situation, and it embodies the economic, political, social, and cultural dilemmas that Europe must face today—much as Kassel in 1955 embodied the need to deal with the trauma of destruction brought about by the Nazi regime and simultaneously served as a strategic location at the onset of the Cold War. If Athens exemplifies the current issues that extend beyond the proverbial notion of the "Greek Crisis," these problems—which are as much European and global as they are Greek—remain unresolved. Yet they present us with an opportunity to open up a space of imagination, thinking, and action, instead of following the disempowering neoliberal setup that offers itself as (non)action implied in the (non)choice of austerity. While the specific timing and choice of locale of Kassel in 1955 were precisely the factors that allowed documenta to develop into a now half-century-old venture, those sociopolitical parameters that made documenta urgent are no longer in play. This sense of urgency, then, must be found elsewhere.

Szymczyk and his team concluded by noting that documenta 14—in its temporary displacement and doubling of perspectives—would enable those artistic strategies that reach toward the reality of a contemporary world, one understood as a place for a multitude made up of individuals, and not as a territory defined by hegemonic relationships that make it a place of suffering and misery for many. It is this world that will be addressed in the exhibition, the world larger than Germany or Greece.

We have 40 guests and no members online