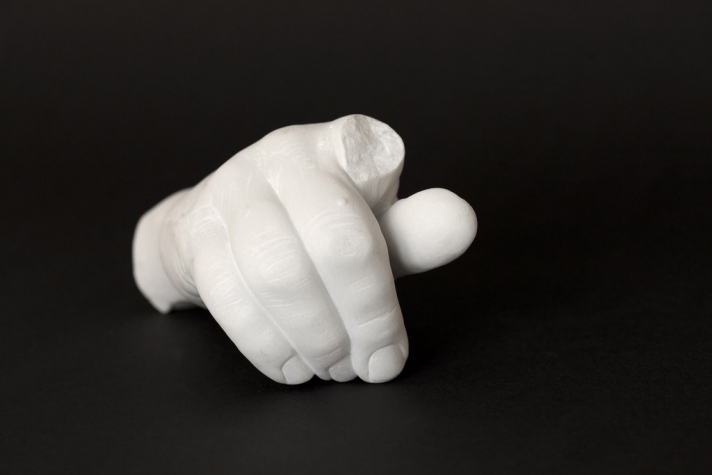 Gagosian is pleased to present “Rosy-Fingered Dawn,” a correspondence between Douglas Gordon and Lawrence Weiner.

What do you do when you dig something up – do you put it back, or do you display it? Because if you display it, there would be a hole where it has been.
—Douglas Gordon

Art is not supposed to interrupt the flow of life, it’s supposed to bring to you information that changes the next course.
—Lawrence Weiner

For both artists, the written word is a formal foundation and a conceptual conduit. Exploring processes of human consciousness and perception, Gordon reveals the dual nature of the self, while Weiner exposes the sculptural dimensions of language. “Rosy-Fingered Dawn” is a recurring epithet from Homer's Odyssey, an optimistic proposition for a new beginning.

Gordon’s projections, installations, photographs, text works, and performances investigate the potential of collective memory. Here, seven marble sculptures depict parts of the artist’s hands and forearms in embracing positions. The gestures can be read as either innocent or sinister. Precise details, like veins and creases in the skin, emerge from more amorphous, uncarved areas. The hands are simultaneously in progress and in ruin, their missing fingers and jagged surfaces evoking fragments of ancient sculpture. This battle of selfhood, a persistent theme in Gordon's work, continues in Shadows and Ghosts (2012). Around the gallery walls, reverse-stenciled white lettering emerges from a faint cloud of metallic gray spray paint, describing the “demons” of a “former self,” waiting nefariously for the current self “to join them.”

Weiner’s work intersects the structure of language with the structure of sculpture. His phrases and striking graphics—stenciled, painted, inscribed, or otherwise applied to walls and surfaces—inescapably alter their given context. Here, in overlapping English and Modern Greek, Weiner evokes the predatory attraction of one culture for another, suggesting a fatal erotic encounter. The text is presented in vivid blue and reflective silver, and arranged in sliding sculptural segments that accentuate the innate materiality of language. In Weiner’s words, it “HAS TO DO WITH THE CARESS OF ONE CULTURE TO ANOTHER & AS IT ASSUMES AN UNDERSTANDING OF THAT CULTURE IT DISCARDS ITS MEANING.”

We have 15 guests and no members online