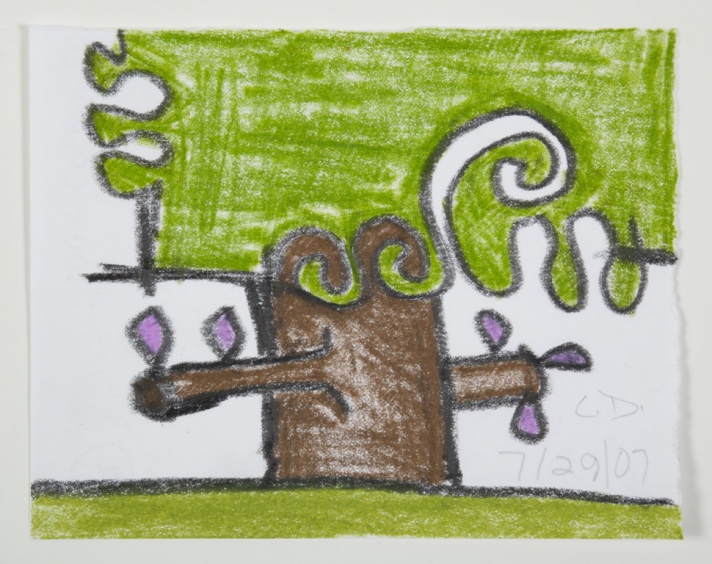 The Beernier/Eliades Gallery is pleased to present the first solo exhibitioon in Greece of paintings by Carroll Dunham.

Carroll Dunham (b.1949, Connecticut) is widely acclaimed from the late 1970s for his conceptual and emotional approach to painting which wavers between the figurative and abstract, defying and redefining the very gesture of painting throughout history. He graduated from Trinity College inn Hartford in 19772 and has since continued to develop a uniquely personal and idiosyncratic style that has garnered worldwide recognition .

Dunham’s work is characterized by colorful painted compositions an d biomorphic subjects unfolding in an intricate narrative framework that borders poetically on the psychedelic and overtly sexual. Dunham’s brush challenges the very nature of color, form and line in its iconic compositions, all of which are characterized by the exuberant animation of geometrical relations.

The body of work exhibited he re is especially important and moving in its choice of trees for subject-matter , as some of the first works that elevated his career in the 1980s were created on pieces of plywood, on which the natural wood patterns came to direct the overall shape and form off fantastic creatures and scenery.

Dunham m in turn began to explore the subject of trees in 2007. These trees from which grow bright flowers and large leaves, reveal themselves as part of a complex visual terrain inhabited by a microcosm of various latent figures and plants – that undermine thee apparently innocent subject matter, typified in western consciousness by the sweet innocence of children’s garden drawings.

In one tree, foliage resembles the blade of a n axe, a noose is hanging from the branch of another, while overall branches and leaves are interlocked in a violent internal confrontation with sexually loaded connotations. Each of these semi-mythical trees is dated and signed by hand, a bold basic reminder of the act and the fact of painting.

Last modified onWednesday, 12 March 2014 21:05
More in this category: The wreck of Antikythera: The ship, the treasures, the Mechanism Damien Hirst: The Complete Spot Paintings 1986-2011

We have 74 guests and no members online