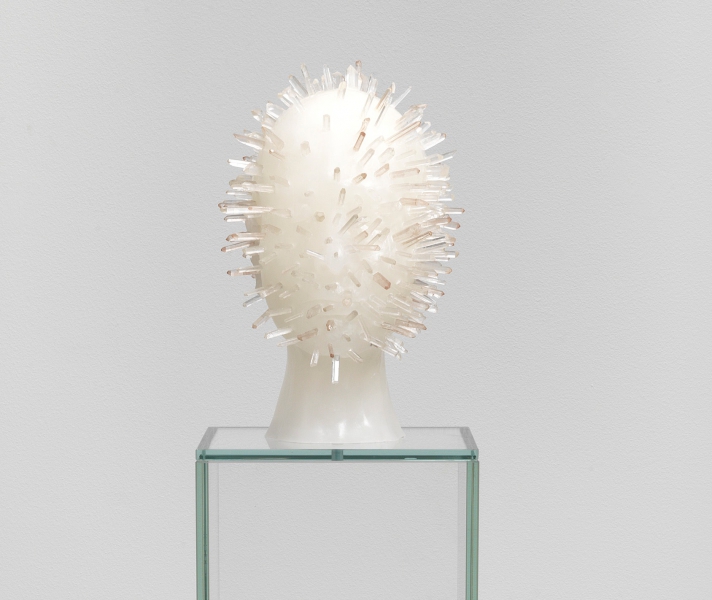 When all the knots of the heart are unloosened, then even here, in this human birth, the mortal becomes immortal.
—Katha Upanishad

The kundalini (coiled snake) is thought to be a latent energy column that lies dormant at the base of the spine. The awakening can occur through intense meditation or even traumatic experience. Once activated, the body’s energies tune through the spinal column and a universal consciousness sets in, like the opening of the so-called “third eye.”

Dorothy Iannone’s iconic work I Was Thinking of You II (1975/2005), a freestanding painting containing a video of the artist, celebrates the uninhibited joy of sexuality. The moment of awakening is detailed in The Fountain of Wisdom (1988–89) by the late clairvoyant and remote viewer Ingo Swann. The painting portrays a libidinal trifecta rising from a vortex: a muscular hirsute, a serpentine leather cop, and a burlesque animus. Similarly, in Marina Abramović’s shamanistic bust, healing crystals emerge from all surfaces of the face, tracing points of energy as they breach from the source.

Since the 1980s Paul Laffoley, also known as the Boston Visionary Cell, has been designing intricate axis mundi that map human esotericism. His recent work The Myth of the Zeitgeist (2013) conveys a sacred geometry issuing from the source of history’s most potential energies. In Reflexologie plantaire (Li Min Khun) (2011), Camille Henrot applies reflexology techniques to a block of clay, treating it as flesh and casting the impressed form in bronze. The cerulean stare of Y.Z. Kami's Blue Dome I (2010) radiates like an evil eye, while Borna Sammak's animated video painting strung up with orange hooks and cables evokes an ecstatic state of suspension. Approximating the pillars of creation and a blooming third eye, the present works constitute an eclectic synthesis of spiritual and physical gestures, emitting a palpable energy that can be felt from placebo to Sedona.

We have 40 guests and no members online