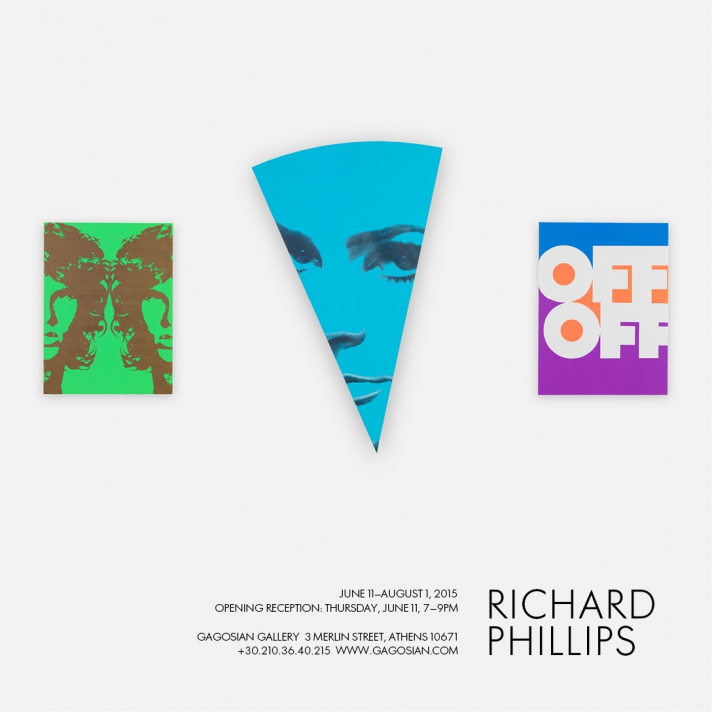 In his paintings, Phillips engages the complex web of human obsessions to do with sexuality, politics, power, death that are constantly exploited in mainstream media. Subjecting popular images to a range of classical painterly techniques, he estranges their familiarity and thus imbues them with new meaning. Photographic images of politicians are re-cast in neon, while supermodels are represented as academic paintings, as if to augment their status as pop icons. Over and over again throughout his work, the glossy idealism of advertising propaganda is subverted by his underlying resistance to its blatant seduction.

Departing from the more photorealistic tendencies of recent years, in his newest works Phillips culls celebrity portraits, retro textbook illustrations, logos, and Op Art motifs to produce compressed images in an electric palette. The subjects themselves are superceded by elements of Phillips’s eccentric representation of them that emphasizes a synthesis of form, color, and critique. Psychedelic patterns overwhelm traces of familiar faces and images, all rendered in oil and wax emulsion. In the Warholian portrait Jim Morrison (2015), the rock star's face is mirrored flatly and mechanically against a bright green background. In Chinchillas and Guinea Pigs (2015), animals are similarly reduced to graphic silhouettes adorned with neon red, orange, and yellow stripes reminiscent of 1980s surf wear.

Paintings consumed by optically charged patterns represent an even more direct method of disorientation. Illustrations from psychology textbooks and religious cult periodicals are accelerated into strident abstractions. These mesmerizing repetitions are juxtaposed with figurative subjects in multi-panel paintings; in Endless II (2014), two “posterized” wartime images flank a pink infinity loop. In the diptych To Be Titled (The Venice Beach Connection) (2015), a faint close-up of Sharon Tate’s face is engulfed by a vibrant rainbow spectrum. Expanding upon postmodern appropriation strategies through new and historical painting techniques, Phillips manipulates, recombines, amplifies, and viciously undermines canonical images, probing and challenging their dominant influence in contemporary culture.

We have 46 guests and no members online