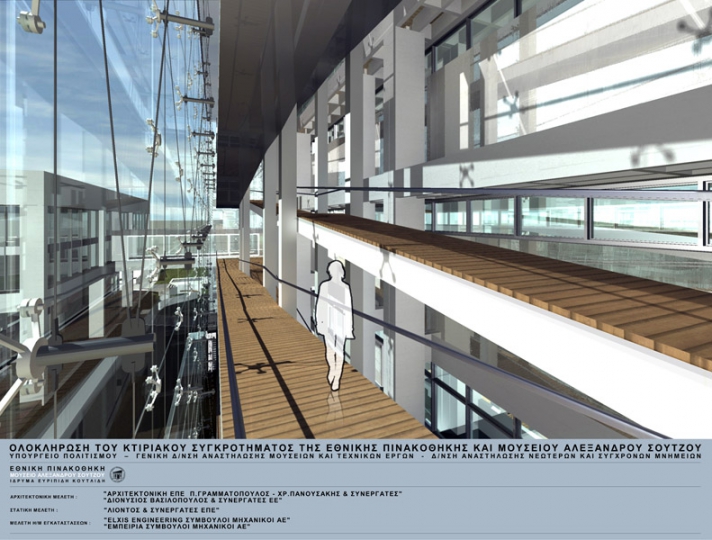 A characteristic example of the International Style, the National Gallery building was designed by the architects Professors N. Moutsopoulos, Pavlos Mylonas and Dimitris Fatouros. (The first designer withdrew later). Founded in 1964, it was inaugurated in 1976.

Over the years, the need for modernization and expansion of the complex became imperative:  the extent of the National Gallery – Alexandros Soutzos Museum collections  (20,000 art works), the limited exhibition space for both the permanent collections and for periodic exhibitions, the inadequate storage facilities, the failure to provide for the smooth operation of the up-to-date, innovative conservation laboratories and of the unique art history library, the shortage of office administration space, the absence of auditoriums, of educational programme facilities, of a gift shop, of a cafe-restaurant, all created problems in the museum’s operation and prevented it from catering to public demand, which has multiplied in recent years thanks to the extensive exhibition and education activity (six million visitors in the two last decades).

After continuous representations by the current management, the Ministry of Culture originally commissioned the first designers (P. & K. Mylonas and D. Fatouros Architects) to prepare a preliminary design which, after a long delay, was eventually sponsored by the Maria Tsakos Foundation.

In 2008, the Ministry of Culture conducted a public tender for the final design, which resulted in the selection of Architektoniki Ltd. Grammatopoulos-Panoussakis Architects and D. Vassilopoulos & Partners S.A.

The project adds to the existing 9,720-m2 building another 11,040 m2, more than doubling its operational area (20,760 m2 in total).The museum acquires an additional 2,230 m2 of exhibition space, 1645 m2 more of warehouses, an auditorium seating 450, an educational venue, a reception and a 910-m2 museum shop, as well as a third-floor restaurant with panoramic views of the Acropolis and all of Athens. A second cafe will operate on the ground floor and garden.

The existing building will be strengthened with additional earthquake reinforcement.

The inspired design of the new National Gallery changes, not only its function, but also its face, adapting it to the museological and aesthetic perception of the 21st century.

The project is included in the OP "Attica 2007-2013" under decree ΕΥΠΟΤ/A1 ATT 24/1411/11-04-12 by the General Secretary, Ministry of Culture Ms. Lina Mendoni. The budget is supplemented by generous support of the Stavros Niarchos Foundation. The contracted construction company, TOMI S.A., selected by an international tender, has already been installed, and work is in progress.

The project is carried out under the supervision of the General Secretariat of Culture of the Greek Ministry of Education and Religious Affairs, Culture and Sports (Directorate for the Restoration of Modern and Contemporary Monuments).

We have 225 guests and no members online