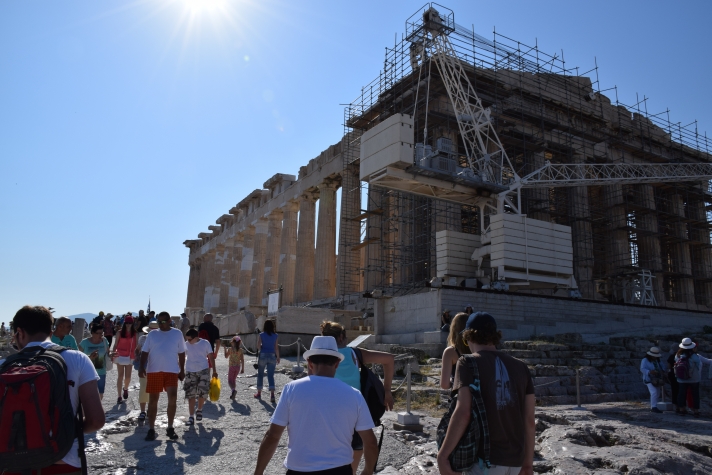 Monuments at the Athens Acropolis will undergo a new series of restoration works until 2020 with a 5 million euros  budget which will include works to the Parthenon’s western pediment, on the north wall of the ancient monument as well as to the Propylaea and the Erechtheion.

The protection, conservation, restoration and enhancement of the monuments of the Athenian Acropolis, one of the most important sets of monuments of world cultural heritage, are realised by the Acropolis Restoration Service. The interventions are carried out to maintain and hand over to future generations, in the best possible condition, the unique monuments that were created by the Greeks at the peak of the Classical civilization, to promote their artistic values and appreciate their architectural form and function.

The scientific responsibility for the implementation of the restoration project lies since 1975 with the Committee for the Conservation of the Acropolis Monuments (ESMA), a multidisciplinary scientific panel of experts. The interventions began in 1975 as a rescue operation for treating the serious structural problems of the monuments and the rapid degradation of their surface. The methodical investigation of the surviving architectural material allowed the correction of misplacements from previous restoration interventions and made possible, in conjunction with the reintegration of scattered ancient material, the restoration of greater areas of the monuments, thus greatly improving their original form.

The systematic documentation, the focused studies before any intervention and the development of advanced technological applications during the execution of the works have rendered the work carried out on the Acropolis monuments in the last 38 years internationally recognised.

The project also envisages the documentation of the works conducted through film and photography with the aim to be utilised in educational programs aimed at both students and teachers.

It is co-funded by Greece and the European Union through NSRF’s “Competitiveness, Entrepreneurship and Innovation 2014-2020” program.

We have 47 guests and no members online