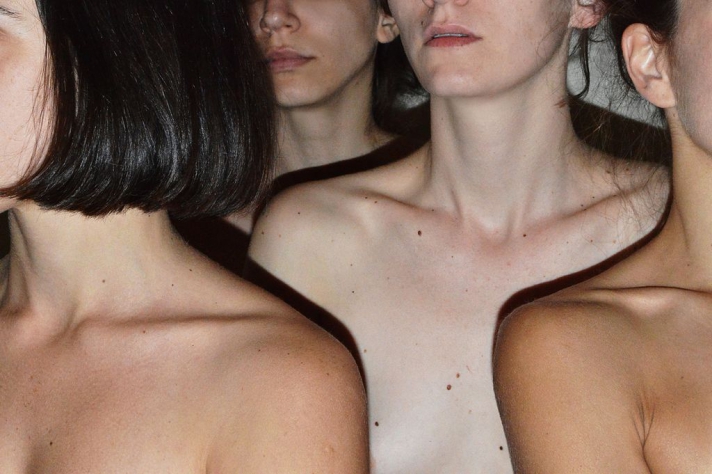 The Greek artist divides his time between Athens and London. Following his first solo exhibition, which took place in London in collaboration with the Queer Archive, Kostis Fokas will now occupy the premises of Atopos to produce a series of new artworks as part of the Occupy Atopos residency. His photographs, often taking the form of a personal diary, have been described as ‘a human sculpture testimony’ and as a ‘landscape where the paradox meets the ordinary’.

Fokas uses his models as toys in a provocative and humorous manner, giving them the freedom to participate in the whole creative process. He often adds several tools and props, such as masks, sex toys or cheap cameras in his imagery, seeking to capture the moment, to encapsulate his subject between reality and fantasy.

Fokas’ influences include photographer Guy Bourdin, the Dada movement, Glitch Art and aftermidnight scrolling on Tumblr among other things. Extensive tributes dedicated to his photography have been published in Metal Magazine, Beautiful/Decay, iGNANT, Lui, dazeddigital and many more international publications and websites.

Furthermore, as part of its 10 year anniversary Atopos «unlocks» its premises and collections to the public and presents an exhibition of British designer Craig Green and of the Atopos Paper Fashion collection. The presentation of the paper dress collection, which includes rare items by Issey Miyake, Helmut Lang, Maison Martin Margiela, Walter Van Beirendonck and Hussein Chalayan, Campbell Soup Dress after Andy Warhol, Lisa Dress by Robert Wilson, Yellow Pages Dress by Howard Hodgkin among others, will be changing on a regular basis.

The result of Atopos new research will be presented in a special publication titled Unlocked which is going to be released in collaboration with La Gaîté lyrique in Paris in 2015.

Last modified onThursday, 05 March 2015 12:46
More in this category: The Depiction of Death in the Work of El Greco Athens. The spirit of the ‘60s: A changing capital

We have 29 guests and no members online