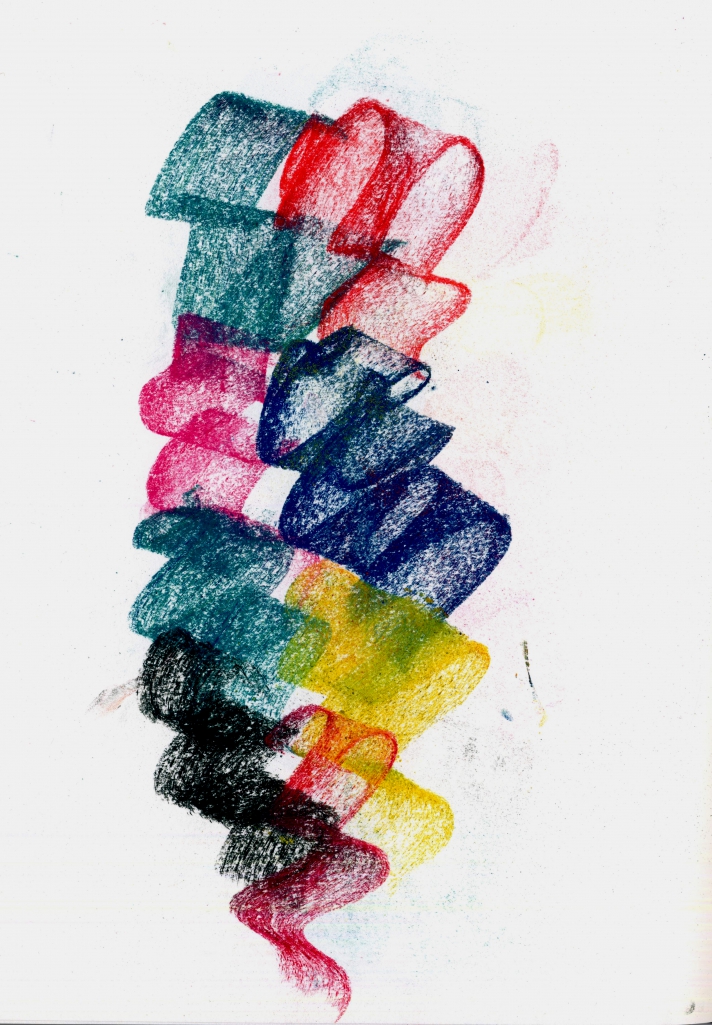 The exhibition, curated by Denys Zacharopoulos, is organised as part of Athens Festival 2015. The show opens on Saturday, June 6 and will run through July 5, 2015.

The artist’s twenty years’ worth of note-taking on display in this show, made alongside Dimitriadis’ literary work, constitutes an impressive wealth of engagement with colour and form as a means of expression and reflection in which emerged, through recurring themes, ways to approach the visible and invisible, the spoken and unspoken world of the author. The museum is transformed into a reading room where hundreds of notebooks and thousands of handwritten pages are available for the viewer to browse and flick through, read and contemplate.

In Dimitriadis’ own words: The period between writing pauses – tiresome complacency and fruitless fallow – is a gap that is very hard to fill in. Yet, the hand is impatient, won’t stay still; it experiences a void, inert energy; it desires to assault, to manage this hiatus, to compensate for the dwindling excitement by another relapse, by seeking out kindling of a different kind.
The best kindling, alongside words, is music notes and colours, the scale of music lines and the spectrum of colours ¬– neither wishing to ignore nor meaning any disrespect for the range of architectural lines and sculptural forms.
This is an inner coercion that finds fertile ground on which to grow, and one, being the beneficiary, rather that the owner, of the ground in question, can only surrender to the management of this ground by a newcomer, the long-expected claimant.

This is how I started, using colours, school pencils and watercolours.

As time went by, however, these were forgotten, and were replaced in my hand by other pencils, keyboards, entries, exhausting excavations with words, their treasures and limits.

It was in such moments when words were almost exhausted that the cessation of writing and dwindling excitement occurred, and, almost atavistically, colour emerged, in soft manifestations and rapid-fire outbreaks, its inexhaustible restorations and extreme performances, peaks and plunges, explosions and erections, an outflow similar to that of words, with the same borderless revelation of the motions of myth and desire.

Language now spoke in colour; it spoke of unrevealed and the endogenous, extending on the surface of paper, becoming the epiphany of an untrodden inland.

Visitors are welcome to browse through this inland, to thumb through and touch the “Notebooks”.

According to Denys Zacharopoulos, curator of the exhibition and artistic director of the Macedonian Museum of Contemporary Art, “rarely authors save their sketching gesture from fetishistic transforming into a painting. Dimitriadis, following Victor Hugo, limits his lush engagement with color and shapes to an expression that completes his writings, without turning it into an art object. Through recurring themes, Notebooks approach the visible and invisible, the spoken and the unspoken world of the author. He writes in a place restrained by space and time, in order not to disrupt his concentration so he can liberate his writing from the constant flow of words and the body form the constant use of the linear writing, he uses pencils and colors as continuation of the line and the gesture, as a mental exercise that keeps forms and expressions from relocating to the world of images.

Through these pages, the viewer can perceive most modern art as an artistic reference, but the author is concerned with the liberation of his writings rather than the representation of the image. Dimitriadis is standing alone in the field of artistic practice. As Dimitriadis notes “The period between writing pauses – tiresome complacency and fruitless fallow – is a gap that is very hard to fill in”.  The author experiments with the act of self – knowledge but doesn’t explore another quality. The same gesture develops the writing and persistently stands upon a gaze.

For twenty consecutive years, Dimitriadis examines the limit of an action that is indifferent to transforming the subject into an object, the private language into a code. These pages aren’t attributed to any reading code. They don’t suggest the secret garden or the aesthetics of the writer. On the contrary, they reproduce like flowers that grow wild. The amazement in front of colors jumping through randomly and unexpected is beyond words, while at the same time they introduce a surprising law, beyond any position or denial.

The Notebooks exhibition transforms the museum into a reading room where hundreds of notebooks and thousands of handwritten pages are available for the viewer to touch, browse and flick through, read and contemplate. This touch is in its own right the essence of the exhibition.”

Within the framework of the exhibition, the following two events are organized:

A series of meetings with the writer, friends and experts of his work, which will enrich his writings and this multidimensional approach between word and image, words and colors.
On Thursday the 11th of June at 20:00, “Lykaon” will be presented, directed by Yannis Scourletis, with Dimitris Dimitriadis and Orestes Karydas (Ticket for the play: 5€, limited availability, please book in advance:  210 – 3215717)
On Thursday the 2nd of July at 20:00, Dimitris Dimitriadis will engage a public discussion about his work with friends. (free admission)

We have 351 guests and no members online