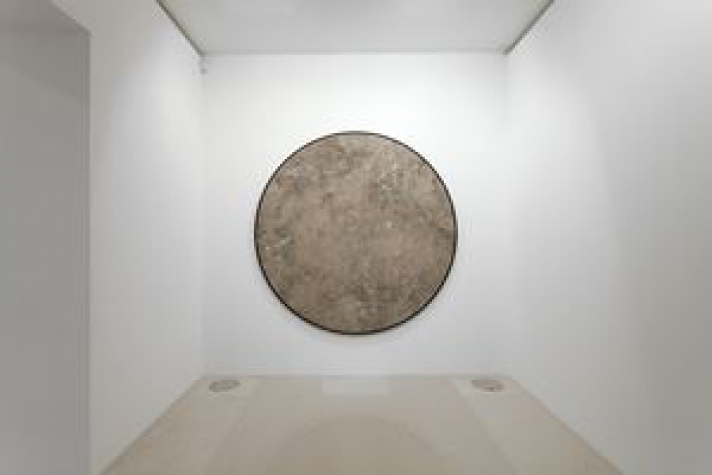 Gagosian Athens is pleased to present new work by Davide Balula. This will be his first exhibition in Athens and with the gallery.

Time and context might be the main elements in my appreciation of beauty, and therefore in my decisions during the process.
—Davide Balula

Balula harnesses all forms of natural matter (solid, liquid, gas, fire), as well as manmade structures and systems (architecture, virtual networks) to generate paintings, sculptures, photographs, performances, and site-specific interventions. He engages these forces to fuel contingent artistic gestures. In River Paintings, he literalizes the representation of landscape by submerging canvases in rivers and creeks to inundate them with water, soil, and algae. Buried Paintings retain stains and sediment from underground, while Artificially Aged Paintings are placed in climate chambers and subjected to humidity and extreme temperatures. Often the viewer is implicated: colors of the curved metal sculptures from the series Coloring the Wi-fi are transmitted to the screens of nearby smartphones and computers via open wi-fi networks.

Performance and collaboration also pervade Balula's art. In Endless Pace (Mechanical Clock for 60 Dancers), first staged at Performa 09 in New York in 2009, sixty dancers formed an enormous circle and interpreted the movements of a clock, marking the passage of time via human improvisation.

At Gagosian Athens, Balula utilizes the herringbone-patterned hardwood parquet floor by removing some of the planks and replacing them with identical sections of white drywall; the hardwood is then set into the gaps left in the wall. This selective shuffling of floor and wall serves to alter the viewer's perception and physical experience of space, in the spirit of artists for whom architecture itself is sculptural potential, such as Gordon Matta-Clark and Michael Asher. New marble sculptures, produced in Athens, are inspired by architect Dimitri Pikionis' pathways through the Acropolis, constructed during the 1950s, which incorporated found marble fragments from demolished neoclassical buildings. These fragments were subsequently eroded by decades of heavy foot traffic. Each of Balula's jagged forms is made up of marble pieces, from large shards to dust. Thus he cultivates site-specific materials, as well as distinctly Athenian influences and references into a resonantly local mise-en-scène.

We have 38 guests and no members online