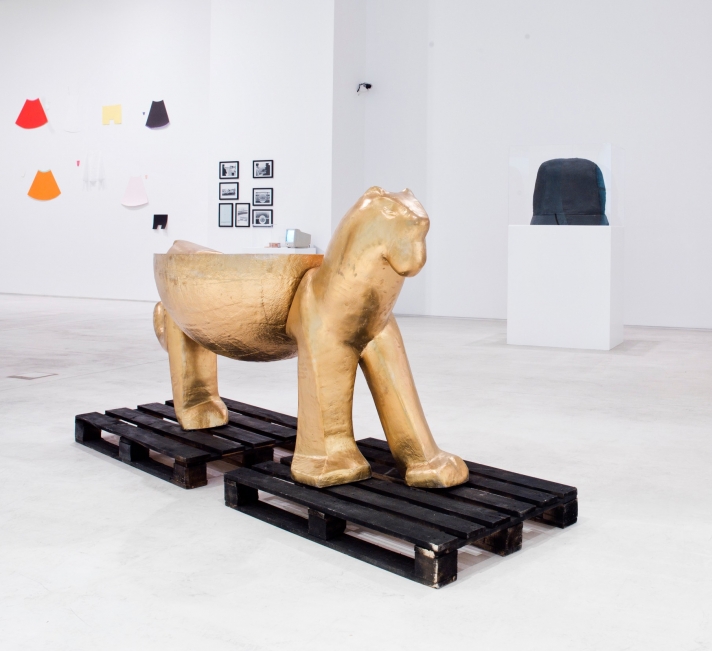 The first exhibition that will inaugurate the temporary exhibition spaces of EMST simultaneously with the Program EMST in the World is a coproduction of EMST and the Museum of Contemporary Art Antwerp (M HKA).

The exhibition entitled Urgent Conversations: Athens – Antwerp will be inaugurated on October 31, 2016 and last until January 29, 2017, essentially restarting the temporary exhibition activities of the Museum, which had been suspended in 2015 due to the relocation at its permanent home and due to the activities that were taking place for the operation and receipt of the new building.

The exhibition aims to be a theoretical and visual dialogue, based on works from the collections of both Museums, which includes more than 70 works and is structured in 22 thematic units. In April 2017, the exhibition will travel to Belgium on a smaller scale. Urgent Conversations: Athens – Antwerp is the first temporary exhibition in the long overdue public unfolding of the Greek National Museum of Contemporary Art, Athens (EMST). The project offers a reflective dialogue between the collections of EMST and M HKA, the Flemish Contemporary Art Museum, based in Antwerp. This exhibition commences the program EMST in the World.

The impulse of both Urgent Conversations: Athens – Antwerp and EMST in the World is the necessity of cultural dialogue on a global scale, also within multifaceted Europe. Societies nowadays tend to polarize in 49 % versus 51 % camps, negotiations start from antagonistic positions as a default position, introversion and individualism became entrenched states. There may be loftier aspirations than the capacity of conversation, but its recent fragility often reached critical levels and can be described as an urgent situation.

Urgent Conversations: Athens – Antwerp has been developed bottom up, each time starting from work of a Greek and a Belgian artist, that resonate, searching a notion that arises from this resonance, then adding a third artist from elsewhere in one of the two collections. In this way the exhibition was structured around 22 notions with each time work of three artists in a dialogue around it, the total consisting of more than 70 works from 66 artists.

This exhibition enacts the belief of both museums that works of art may constantly emanate new meanings, open questions and initiate a much desired dialogue, that basic ground for human culture. This project is therefore also a counter-proposal to cultural and curatorial sameness, opting instead for a multitude of convincing constellations of subjects, impossible to exhaust, leading up to discussions concerning both individual and collective realizations, and to actions.

Athens and Antwerp seem to represent two extremes of Europe today, but at the same time Greece and Flanders are both regions of Europe that added many crucial threads to its cultural fabric. Institutions like EMST and M HKA may further cultivate that. EMST in the World will develop in the same vein further dialectical relations between EMST and institutions elsewhere with corresponding aims and practices, geared to the research and curation of contemporary art and other contemporary cultural manifestations.

We have 421 guests and no members online