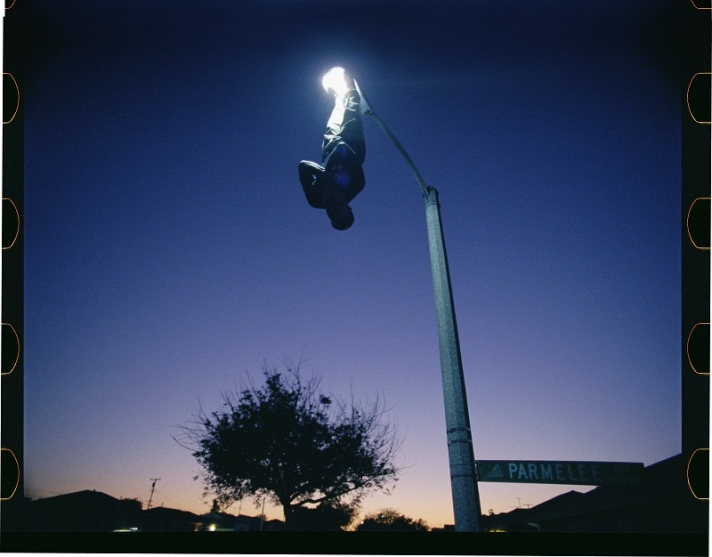 Bernier/Eliades Gallery is pleased to present the first solo show of the award-winning filmmaker Kahlil Joseph.

Kahlil Joseph has worked with some of the most influential artists in music, including Beyonce, Kendrick Lamar, Seu Jorge, Shabazz Palaces & FKA twigs. One of several collaborations with Shabazz, Black Up, was included in the Ruffnecks exhibit at the ICA and was also selected by Kevin Jerome Everson for his screening, Through the Lens of the Blues Aesthetic, at the Whitney Museum of Art in 2013.

Joseph’s body of work falls somewhere between music videos and short films. Though they are definitely works of art, they’re usually watched on a laptop on Vimeo and on museum walls.
His works are gorgeous but unsettling, meant to reflect the underlying instability that threatens to erupt any day or moment. His camera gracefully travels through ordinary life scenes, erupted by scenes of violence and then there are moments of magical realism. Like MOCA’s chief curator Helen Molesworth said for Kahlil’s work m.A.A.d: “I encourage you to let that piece wash over you. I watched it three times in a row and when it was done I felt like I needed to swim to the surface to come up for air.”

In his first solo show at Bernier/Eliades, the artist will present three films:

m.A.A.d., a collaboration with musician Kendrick Lamar, which evolved from a short film into a two-screen video installation in 2014. It is a lush portrait of contemporary Compton, California. The camera sinuously glides through a predominantly African American neighborhoods capturing quotidian scenes hovering between the real and dreamlike. The dual screen installation was originally exhibited during The Underground Museum’s group show, The Oracle. It was then acquired by the Museum of Contemporary Art in Los Angeles, during their 2015 season, for an exhibit entitled, Double Conscience, which was Joseph’s first solo major museum show. In June 2016, the Bernier/Eliades Gallery exhibited m.A.A.d. at Art Basel Unlimited.

Nooksie & Janet, this two screen film installation was originally filmed in Grasyon, Oklahoma in 2012 as part of a London based commission the artist received.  The core of this work is not based on a rodeo at all but rather on the spirit of woman named Janet who passed away only months before filming, and on her husband and life partner, Nooksie who founded the rodeo in the early 1970’s. This version of the work is the first time it has ever exhibited.   The film’s music is composed by Flying Lotus.

Until the Quiet Comes, an arresting, visually sensuous portrait of life in one of LA's most well known housing apartment complex, Nickerson Gardens. It is a beautifully shot, evocative short film which received widespread critical acclaim and won the Grand Jury Prize for Short Films at Sundance Film Festival 2013 and Video of the Year at the UKMVA’s in 2013. The film was also included in Kara Walker’s celebrated exhibit, Ruffneck Constructivists, at the Institute of Contemporary Art in Philadelphia in 2014. The film’s music is composed by Flying Lotus.

Born and raised in Seattle in 1981, Joseph migrated to Los Angeles in 1999 to attend Loyola Marymount University, where he studied television production. After university, Joseph embarked on a tutelage under accomplished directors, cinematographers and artists, including Malik Sayeed and Arthur Jafa.
He has participated in several group and solo exhibitions and film festivals: 2015 Toronto International Film Festival, World Premiere, Toronto, Canada. Marfa Film Festival, Marfa, Texas. Double Conscience (solo show) Museum of Contemporary Art, MOCA, Los Angeles. Music Video Festival, São Paulo, Brazil. 2014 The Oracle (group show) The Underground Museum in Los Angeles, CA, curated by Noah Davis.
Founded in Athens in 1977, the BERNIER/ELIADES Gallery has always been at the forefront of contemporary art in Greece. Jean Bernier and Marina Eliades have introduced a number of artistic movements such as Art Povera, Minimalism, Land Art and Conceptual Art to the Greek public, focusing also on young  American and European artists. In April 2016 they opened a new space in Brussels.

We have 35 guests and no members online