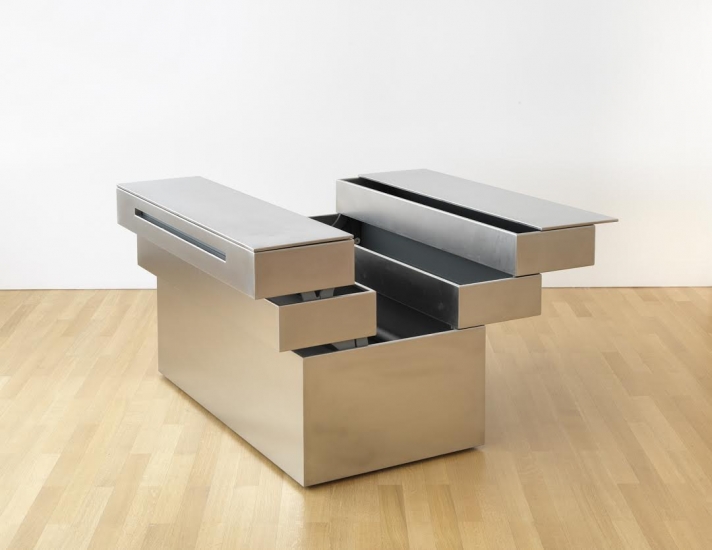 Like many Modernist predecessors who worked across related disciplines, Nouvel describes himself as an architect and a designer. His design products derive from architectural commissions, or from alternative visions that correspond to his building design but which are linked to specific use. Regardless of the scale of the object or the architecture, Nouvel employs the same rigorous approach, imbuing the objects and accoutrements of everyday life with a certain lyricism that is also streamlined and utilitarian.

As the title suggests, Triptyques are three-paneled colored mirrors, each in an edition of six. The central panel is fixed to the wall, while flanking and cantilevered panels are engineered to be movable. Four mirrors are presented, each different in color and orientation. Nouvel comments, “The mirror is a piece that you want to live with, in which you reflect intimate images—images from your home; you can capture a piece of a window in it somewhere.” Colors range from light orange to blood orange to red, his signature color. The mirror finds its essence whether open or closed. When opened, Nouvel’s mirrors evince the importance of color in their surroundings; when closed, they preserve a certain austere elegance.

The extra-large stainless steel tool box titled Boîte à outils (1987–2011), meanwhile, is an emblematic and celebrated design. It is an object of function and fantasy at the same time—a deluxe storage system based on the standard toolbox that can be found in every household. Nouvel has reinterpreted this utilitarian staple, streamlining it while endowing it with additional features.

Jean Nouvel was born in Fumel in 1945 and studied at the École des Beaux-Arts, Paris. A key protagonist of intellectual debate in France regarding architecture, he was a founding member of Mars 1976 and Syndicat de l’Architecture. Nouvel’s buildings include Musée du Quai Branly, Paris; Fondation Cartier pour l’Art Contemporain, Paris; Lucerne Culture and Congress Centre, Switzerland; Torre Agbar, Barcelona; and Guthrie Theater, Minneapolis. The Louvre Abu Dhabi, and the National Museum of China (NAMOC) are among the projects currently in planning. Nouvel’s distinctions include the Aga Khan Award for Architecture for the Institut du Monde Arabe (1989); the Gold Medal of the Royal Institute of British Architects (2001); the Wolf Prize in Arts (2005); and the Pritzker Prize (2008). Exhibitions of his work—including “Jean Nouvel,” a retrospective at Centre Georges Pompidou, Paris (2001)—have been held throughout the world, from New York to Rio de Janeiro and Tokyo.

We have 55 guests and no members online