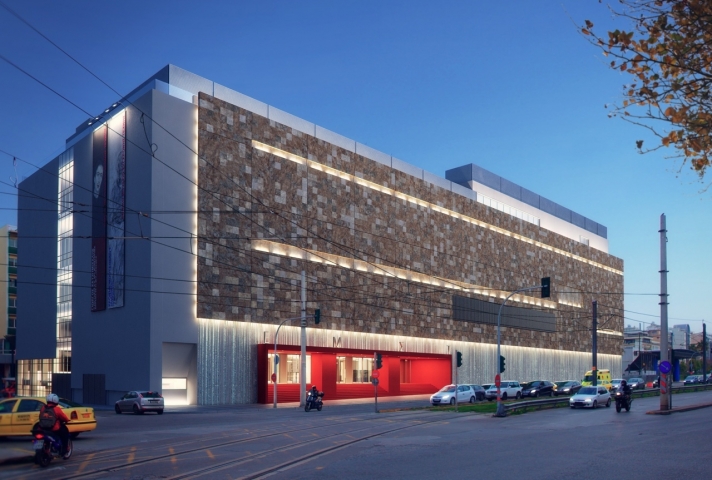 It towered over the area for many years while lying in a state of abandonment. Afterwards, when it was being reconstructed, it towered over the area while covered in tarp. In any case, the “old FIX brewery” – a signature example of post-WWII modernism, designed by the innovative architect Takis Zenetos (1926-1977), which accentuated the horizontal dimension of the building that runs parallel to Syngrou and Kallirois Avenues through the use of linear horizontal glass windows – always stood out. Due to its location, situated between two of the city’s main streets, as well as its girth, this building could never go by unnoticed. For the people of Athens, it served as the most famous abandoned building in the city for decades, with most attributing to it the rather insignificant role of reminding them where to turn in order to reach the district of Neos Kosmos.

“This is the kind of museum that I wanted for 21st century Athens. This gem of a museum is a gift to the people of Athens, as well as to all of Europe. It is a museum that is open to the entire world.” Anna Kafetsi

One bright September day, however, the unexpected happened. Local residents and passers-by could hardly believe their eyes when they were met with the pleasant surprise of seeing the building’s Syngrou Avenue side façade unveiled. The building was completely reconstructed and redesigned in order to house the National Museum of Contemporary Art (EMST), with this project due for completion in October when the façade on Kallirois Avenue will also be unveiled. This project was the finest gift that this area – located right in the heart of Athens (just a hair’s breath away from the Temple of Olympian Zeus) – could have received in order to bolster its image. “This is a gem of a museum, as you shall see, and it stands as a gift to the people of Athens and all of Europe as well,” Ms. Anna Kafetsi told On Air. As the director of the EMST right from its inception, back when it was “housed” amidst the rubble of a room inside the old brewery, she is also the woman who served as the heart and soul of the initiative to redesign this site.

A Building that Lives up to European Standards

“We are talking about a building that covers a space of 20,000 sq. meters and lives up to the highest European standards,” Ms. Kafetsi stated in regards to the reconstruction project. “It has eight levels. Three of these will be used to house the permanent collections, while the others will be set aside for our periodical exhibitions and plethora of activities. The eighth level, which we refer to as “the terrace” amongst ourselves, possesses amazing capabilities for outdoor multipurpose use during the summertime and whenever there is fair weather in general. The restaurant, which features an amazing view of the Parthenon, is reason alone to visit the museum.”

Of course, the bright images of the future that lies ahead do not erase the past. In fact, one cannot help but compare the two. “You know, the EMST is coming into this new building together with all of its history,” Ms. Kafetsi points out. She can remember the days when she and her team had to come face to face with a city and country in which “contemporary art” was something completely incomprehensible. Athens was one of the few European capitals without a national museum of contemporary art. It was not until 1997 that legislation was even passed recognizing the need for the operation of such a museum. Just how many obstacles needed to be overcome in a city that was last to catch up with the times and realize the significance of modern art? “One major difficulty is the artistic education of our city’s residents,” Ms. Kafetsi remarked. “That is why right from its very inception, the EMST turned its attention to activities and exhibitions, and did not limit itself to just managing its collection or facilities. The biggest bet we had to win was to familiarize the people with modern art in a city that had lagged so far behind.” Nevertheless, it was apparent right from the start that there were conditions that could enable this bet to be won with the help of tenacity, faith in the vision, and hard work. “I will never forget Tsoclis’ exhibition which ran from December 2001 through January 2002… Athens was a wintry ghost town, covered in snow. It was a Sunday and there was not a soul to be seen outside on the street… And yet, that day 300 people came to see the exhibition, which ended up attracting a total of 25,000 visitors,” she recalled. “This museum was begotten of its very own activities”.

Then again, can you really have a museum without a collection? “That was our other major concern; the other major struggle that we are continuing to fight up until today. We did not have an endowment. We started from scratch back in 2000,” Ms. Kafetsi said. Today, the EMST’s collection includes over 1,000 pieces, including artwork by Kaniaris, Kessanlis, Tsoclis, Mpotsoglou, Psychopaidis, Hatzimichalis, and hundreds of other Greek and foreign artists. It is not hard for someone to realize just how much work was put into this endeavor throughout all these years if they consider the fact that the museum’s collection never received any ad hoc funding, and still made it to where it is today. In addition, they need to remember the struggle that took place to ensure that the reconstruction of the FIX building was completed – during the most unfavorable economic climate that Greece has ever known, at that – so that the country might be able to proudly display this gem, whose grand opening will coincide with the assumption of the rotating EU presidency by Greece. That is why when you hear Anna Kafetsi say “I love museums very much, and I fought very hard for them,” you cannot help but believe her.

With contemporary art as its tool, the EMST’s comprehensive cultural mission appears to revolve around two axes. One has to do with what Ms. Kafetsi calls “selfknowledge,” or gaining a better knowledge of what was going on inside ourselves all these years, while the second has to do with “knowledge of others,” or gaining knowledge about what other people were doing. This intercultural path and this continual search for cultural crossroads can only be achieved by a policy of openness that is free of prejudice, which obviously also holds true for the origin of the artwork on display (there are pieces housed from every corner of the earth) and its genre (painting is not the only form of art out there). “This is the kind of museum that I wanted for 21st century Athens; a museum that is open to the world,” Ms. Kafetsi noted as she stressed the sense of refinement that the new site will create among the visitors, which will never cease to be accessible to everyone. It is her strong belief that a museum ought to be social, because more than anything else, it is a deeply democratic right. “Let’s not forget that the museum will forever remain a major conquest of the French Revolution,” she concluded. [Source: ON AIR, Issue 16, By Christina Tsamoura]

Last modified onThursday, 01 January 2015 16:19
More in this category: Guided tours in Athens for free Rethink Athens: Architectural transformation of the city center in 2016!

We have 107 guests and no members online